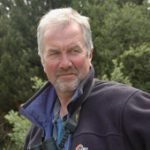 Wildlife art and a consuming interest in wild birds and their environment have always been central to my work as a wildlife artist. My earliest memories are filled with images of birds. Capturing their lives through field sketches and watercolours has shaped my life and career since then.
As children, captivated by the antics of blue and great tits feeding on the food scraps outside the kitchen window, we were encouraged by parents to draw and sketch what we saw and our simple yet honest portrayals were proudly pinned to the wall. A sympathetic connection with nature evolved. I was hooked.
I have always had a special interest in passerines and the garden bird-table was always an endless source of interest to me. Here, the finer details of bird topography could be studied and painted.

In the mid seventies, with the purchase of my first telescope, the world of distant waders, geese and seabirds could now be viewed in a more intimate way. Subtle plumage details and behavioural patterns were sketched with more confidence and conviction. I also developed an interest in vagrant species and my early sketchbooks were crammed with drawings and notes on rare finds. However my enduring interest is in the drawing and painting of any living bird or landscape and a desire to express on paper what I see and feel.

Painting & Illustration
In the mid eighties, my first line drawings were published in ‘British Birds’ and other magazines and I began to exhibit work, which included field sketches and watercolours, at local galleries. I was elected as a member of the ‘Society of Wildlife Artists’ in London (SWLA) in 1990. A few years later I was asked by London publishers New Holland to illustrate ‘The Complete Garden Bird Book’, and since then, I have illustrated several other books, including, ‘The Garden Bird Year’, Bill Oddie’s ‘Birds of Britain and Ireland’ and ‘An Introduction to Birdwatching’.

Wildlife Sketches
Sketching in the field is what I love most of all. Be it a humble sparrow or an elusive warbler, the challenge of fixing shapes quickly before the subject disappears is an exercise filled with tension, but one that is ultimately rewarding when it succeeds. Often the sketchbook page is littered with marks and shapes that may seem somewhat disjointed, but with those attempts comes a clearer understanding and step towards the next sketch. Working from life in the field is ever changing and the endless quest to capture the bird’s unique character is the driving force behind my life as a bird artist.

No products in the basket.